Learning outcome: After completing this module students should know how to round up and down and to estimate approximate values without making the detailed calculations.

Numbers are rounded when accuracy is not needed or impossible. Rounding a number to a specific digit means replacing it with a number that is close in value but ends with zeros. Natural numbers are rounded to tens, hundreds, thousands, etc. If the number is rounded to tens, then we replace with zeros the digit in the category of ones. If the number is rounded to hundreds, then the digit zero should be both in the category of ones, and in the category of tens. The number obtained by rounding is called the estimated value of this number. The result of rounding should be written after a special sign “≈”. This sign reads “approximately equal”
When rounding a natural number, you may use the following steps:

As we see number 9 follows the underlined digit, thus we add 1 to the digit of thousands (it is 6), and we replace all the numbers separated by a vertical bar with zeros.
The answer is:
≈ 57,000
More examples with smaller numbers, if you wanted to round to the nearest whole number here, you would look at the digit right after the decimal comma since that is the digit to the right of the digit you want to round.
5,3
3,7
10,9
6,5

What about the 6,5? It‘s right in the middle. For estimating purposes, whenever you see a 5, you will round up. 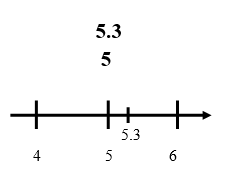 To estimate this digit, you would look at the digit in the ones place because that is the digit to the right of the digit you want to estimate. 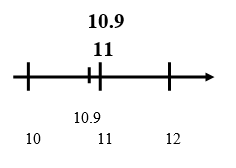 Estimating these numbers to the group of tens, you would follow the same general rule as before, when we were rounding with decimals.

What do we need to do if we wanted to estimate to the hundreds place? Which digit to look at?

This website uses cookies so that we can provide you with the best user experience possible. Cookie information is stored in your browser and performs functions such as recognising you when you return to our website and helping our team to understand which sections of the website you find most interesting and useful.

Strictly Necessary Cookie should be enabled at all times so that we can save your preferences for cookie settings.

If you disable this cookie, we will not be able to save your preferences. This means that every time you visit this website you will need to enable or disable cookies again.

This website uses Google Analytics to collect anonymous information such as the number of visitors to the site, and the most popular pages.

Please enable Strictly Necessary Cookies first so that we can save your preferences!